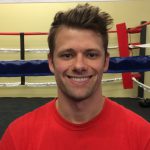 Professor Andrew Heatwole has been training in martial arts for over thirteen years and has been teaching full time since 2009. Andrew started his training at Trident Academy of Mixed Martial Arts and has earned an Instructorship in Thai Boxing, an Apprentice Instructorship in Jeet Kune Do, an Associate Instructorship in Total Defense System, and is a Second Degree Black Belt in JTX (Jeet Kune Do, Thai Boxing Cross) from retired Navy SEAL Pat Tray. Professor Andrew has also earned a Second Degree Black Belt in Brazilian Jiu-Jitsu from the legendary Rigan Machado and is a Representative Instructor in Combat Submission Wrestling from Mixed Martial Arts icon Sensei Erik Paulson. Furthermore, Professor Andrew has also earned a Silver Glove in Savate from Professor Nicolas Saignac.