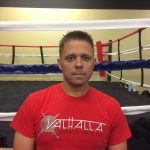 Kru Jason Heatwole began training in martial arts in 1999 under Navy SEAL Pat Tray at Trident Academy of Martial Arts in Woodbridge, VA. Since then he has gone on to train under famous martial artists Guro Dan Inosanto and Sensei Erik Paulson. Jason combines a love of the history of combative arts with practical applications. Jason has competed in numerous Brazilian Jiu-Jitsu, Thai Boxing, Mixed Martial Arts, Savate, and Filipino stick fighting events including Six Dog Brother Gatherings and has attained the level of candidate Dog Brother, taking the name C-Heathen Dog. Jason holds the rank of Kru under Ajarn Surachai Sirisute in the Thai Boxing Association of the United States and the rank of Yellow Glove in Savate under Professor Nicolas Saignac. He also an Apprentice Instructor under Guru Dan Inosanto in Filipino Martial Arts and Jun Fan Gung Fu/Jeet Kune Do.